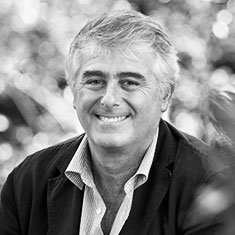 Born in Milan in 1955, he has always been passionate about nature and the landscape. He took a degree in agricultural science and went on to specialize in garden design. He was one of the founders in 1986 of the AG&P greenscape practice, of which he is now sole director and co-proprietor with Paolo Palmulli. He has been active in the design of parks and gardens in Italy and abroad for over 30 years. In 2001 he was the first Italian to win a medal (the bronze) for design in the international competition of the Chelsea Flower Show in London. He currently teaches and has taught his discipline in various graduate/postgraduate courses, including the one for the master’s degree at Milan Polytechnic. He is the author of the book Il giardino inaspettato. Trasformare angoli di cemento in spazi verdi published by Electa in 2011 and brought out in a new edition in 2015. At Expo Milan 2015 he was responsible for the design and layout of the external areas of the Azerbaijani Pavilion. He is a member of the works supervision group of the new “Biblioteca degli Alberi” public park at Porta Nuova in Milan, in the capacity of specialist adviser on botanical and agronomic matters.