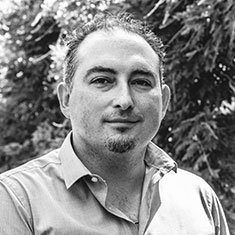 With a degree in architecture from Milan Polytechnic, he is a member of the AIAPP (Italian Association of Landscape Architecture). General manager and partner of the Studio AG&P greenscape in Milan, he works in the field of landscape design, focusing on public spaces and overseeing both the design process and its implementation, in Italy and abroad. He has been in charge of projects of urban landscaping, such as the Centroparco housing development at Segrate, the Art Tower Park residential area in Moscow and the “Naturalia” and “Orangerie” urban parks in Azerbaijan. Among the most recent projects he has coordinated and which are currently underway are the Implementation Plans of Vaiano Valle, Bruzzano and Lampugnano. A member of the works supervision group of the new “Biblioteca degli Alberi” public park at Porta Nuova in Milan, in the capacity of chief operating officer of the installation works. Co-author of the book Paesaggio diffuso: l’esperienza di un nuovo quartiere a Segrate, published by Electa in 2013. He contributes to several specialist magazines and collaborates with the Faculty of Architecture of Milan Polytechnic, with supplements to the Urban Planning Workshops and the International Course of Urban Design.